2. Direct destruction, including the use of laser weapons and the use of drones to counter drones.

3. Monitoring and control are mainly realized by hijacking radio control.

The second type of technology is mainly used in the military field. The following will discuss the first and third types of anti-UAV technologies, and talk about how to use information technology to counter consumer-grade UAVs.

At present, all civilian drones need to use radio technology to achieve positioning, remote control, image transmission and other functions. Of course, some special-purpose UAVs can use methods such as terrain matching, image recognition, and high-precision inertial navigation to determine their position and complete tasks autonomously, but they are not yet popular in the civilian field. Since the drone must use radio technology, it can interfere with the radio, so as to achieve the goal of causing the drone to lose control or turn back.

In just a few years, drones have become popular from a niche group. Due to their rapid development, the potential safety hazards and accidents caused by the "black flying" of drones have been repeatedly banned, so anti-UAV systems have also emerged. So what kind of methods do these "natural enemies" of drones use to encircle and suppress drones?

This type is more suitable for the current flood of drones and the widely used anti-UAV method. Interference blocking anti-UAV strategies are widely used mainly to launch directional sound waves or radio frequencies to the target UAV, interfere with the UAV's hardware or cut off the communication between the UAV and the remote control, thereby forcing no one The plane landed on its own or returned home.

Generally speaking, the simplest and direct way to block interference is signal interference, which has relatively low technical content and low cost. At present, most UAVs on the market use the combination of GPS satellite navigation system and inertial navigation system. It is not difficult for GPS signals to be interfered. The anti-UAV system only needs to launch a certain amount to the target UAV. The power of the directional radio frequency is sufficient. After the UAV GPS signal is interfered, it is unable to obtain accurate self-coordinate data, which will cause the UAV to lose control to a certain extent and cause the operation to fail. However, this method is also the gentlest among many "encirclement and suppression" drone methods. It prevents the drone from falling, and is a way to reduce the drone's "harmful purpose" through interference. 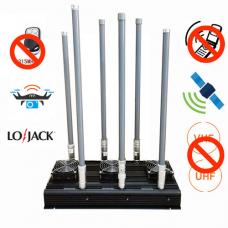 In August last year, researchers from the Korea Advanced Institute of Science and Technology (KAIST) issued a report saying that they have developed a new type of "acoustic interference anti-UAV system". Unlike signal interference, this method uses Sound waves interfere with the UAV's hardware, making it incapacitated.

There is an important component inside the drone-the gyroscope, which can provide the drone with information such as the tilt, rotation and direction angle of the drone to maintain the balance of the drone. Researchers in South Korea have proved that when the sound wave frequency is consistent with the natural frequency of the drone's gyroscope, resonance will occur, making the gyroscope unable to work properly, and causing the drone to fall. Although the method of interfering with hardware is more violent and direct, the relative lack of signal interference is that the targeting and tracking of sonic interference is not as stable as GPS interference, and the cost is expensive, so it is not suitable for the public anti-UAV system. .

Speaking of interference blocking anti-UAV systems, I have to mention the AUDS system, which is also the British Blighter Surveillance Systems, Chess Dynamics and Enterprise Control Systems. The anti-UAV system jointly developed by (Enterprise Control Systems) can be regarded as the most famous anti-UAV device last year. The system mainly uses a high-power radio wave to eliminate drones. Simply put, this kind of radio waves can effectively block drone communication and can shut down drones in mid-air. The attack distance of the defense system is also very long. It can attack threat drones 1.6 kilometers away. It only takes 10-15 seconds to aim at the target. It can also launch a "swarm attack" on the drones and shoot down multiple unmanned drones at once. Aircraft, it is a great threat to the black drone.