The unwanted ringing of telephones in the middle of a movie or concert, soon to be more than a bad memory? Industry Minister Patrick Devedjian definitely hopes that. On October 10, it issued an order authorizing the installation of "jammers" to disable cell phones in theaters and cinemas.

This ends more than three years of floating. Because the law of July 17, 2001 (which establishes various provisions of a social, educational and cultural nature) "allows" this type of disturbance "both for emission and reception (...) in the enclosure of the theaters. The regulator for Telecommunications then issued a decision to “establish, at a technical level, the regulatory requirements for the use of these devices.” This decision, which was sent to the Ministry of Industry in late June 2003, had to be approved before it could be applied.

This is what Patrick Devedjian has just done, concerned about the "catastrophic impact" mobile ringtones could have "on the revenues [of the cinema operators] and therefore on the film's bottom line," he added. he explained on the France Info microphone. Installing such filter or jamming devices will be the responsibility of cinemas, theaters and concerts, he said. Remember that since September 9, 2002, the Justice Orientation and Programming Act also authorizes GSM jammer in prisons. 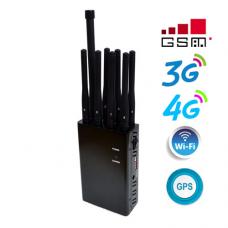 The icing on the cake for cinemas

In a press release, however, the minister recalled two principles that power halls and manufacturers are obliged to adhere to. On the one hand, "jammers must not cause the success rate of calls outside the room to deteriorate." On the other hand, their "location must not stand in the way of the application of the regulations applicable to emergency calls".

This measure enthused Jean Labbé, President of the National Federation of French Cinemas. At France Info's Airwaves, he welcomed this decree, which "is the result of a long request [from] extremely diverse cinemas, ranging from large to small exploitation". For him, "the jammer approval is icing on the cake" after efforts and investments have been made to improve the comfort of the rooms.

Others are far from sharing this enthusiasm. "It is a radical decision," said one of the three mobile operators to ZDNet. "These cuts can create security issues and urgent objections." In 2001, all operators had unsuccessfully requested the withdrawal of this measure during the ART consultation on this issue.

Same story at Orange: "Good communication is enough to curb the problems of good manners in theaters," said a spokesman. As evidence, he said: While the number of cellphone-equipped customers has doubled in a few years, inappropriate behavior has not necessarily increased.

The operator is highlighting the "Citizens' Campaign", which has been running for several months, with posters to encourage customers to switch off their cell phones or let them vibrate on trains or in cinemas. And is concerned about possible overflows from these filter devices: "Who knows if this won't cause problems with the neighbors upstairs or with people on the street?" Asks the Orange spokesman. France.

Henri Asenkat, President of the Association of Manufacturers and Industrial Companies for Cellular and Professional Radio Communications (Acirp *), also reiterates his opposition to the process. "We had long conversations with ART to explain to them that we are not cheap because of the ethics of the manufacturers who want us to network," he said.

"We also claim that this is against European regulations." In 2001, these manufacturers tried to convince ART that this provision violated several European directives (**) with no result. Despite several detailed comments from the UK, Denmark and Finland, as well as the Commission itself, contesting the jamming principle, the regulator sent its decision to the Department of Industry in June 2003.

I think jammers have a positive impact on people’s lives