UAV, abbreviated as "UAV", refers to unmanned aircraft controlled by radio remote control equipment and self-provided program control equipment. In recent years, when the drone industry has shown a blowout development trend, drones have been widely used in traditional and non-traditional security fields. In addition to military applications, they also include scientific research, agriculture, electricity, transportation, and meteorology. And many other industries. In just a few years, drones have become popular from the niche market, especially in the civilian drone application market, and even go crazy and abuse.

The rapid, disorderly and uncontrolled development of drones has become more and more compelling! Potential safety hazards and accidents caused by the "black flying" of drones have been reported and repeatedly banned. In addition to providing aerial photography, some civilian drones also have the function of providing aerial photography, such as secret photography, secret recording, surveillance, investigation, and the drop of items (including contraband and dangerous goods). It brings major security risks and management gaps to government agencies, restricted military areas, major security units, detention centers, major sports events, major festivals, important missions, and the proliferation of drones in airport airspace. With detailed implementation, it is difficult to identify drone users for surveillance, positioning and management to avoid issues such as safety and drone leakage, countermeasures against drone systems or drone jammer. This is imperative! 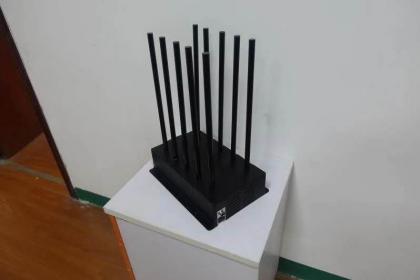 In theory, the best way to implement an unmanned aerial system or countermeasure system to an unmanned aerial vehicle jammer should be: detection (detection) → interference → detection (force landing). Due to the small size of the drone, the poor remote control and data transmission performance, and the low-altitude and very low-altitude flight, regardless of the use of radar recall, optical imaging, audio analysis and other detection methods, they are all caused by the drone. The reflected signal from the airframe is too small, the background noise is low-level interference, the ground communication signal is complex, and the high-level obstacles make it impossible to detect the UAV to achieve a 100% detection rate, and the false alarm and false alarm rate is high. If the existing detection technology is not complete and reliable, then effective interference and suppression of communication frequencies (such as drone remote control, positioning and data transmission) will be a practical, reliable and effective solution.

The solution of this anti-UAV system is to use the unmanned aerial vehicle's no-fly zone and an area around it to transmit interference signals of different standards to suppress interference and suppress the frequency bands commonly used in UAV wireless communication including: GPS positioning and navigation signals, WiFi2.4G, WiFi5.8G, etc. When the drone enters the area covered by the interference signal, its performance results are: loss of connection, loss of control, inertial flight, falling, self-powered landing, etc.

GPS jammers are devices that can interfere with base station communications

Devices that can detect jammers are used by law enforcement