How to choose a mobile phone signal jammer?

If ordinary civilian shielding devices are used in places such as prisons that have strict requirements on cell phone jammer, there will be the following performance:

1. The shielding area has a weak shielding effect, and there are a lot of blind spots and dead corners. Some areas near the window of the cell area, especially on the side of the base station, can be connected to mobile phones, even under certain antennas (equipment). Calls leave opportunities for criminals and fail to fully prevent illegal use of mobile phones. 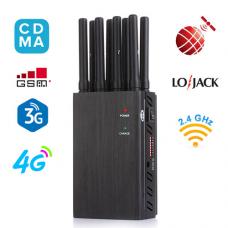 2. The area should not be shielded. Serious interference: The office building and armed police outside the second door of the prison are severely interfered, affecting the normal life and work of the staff; the more serious interference range will be further expanded, and even the base station will be paralyzed by interference. Large areas of communities, factories, and units are subject to strong interference, and people are full of grievances; complaints from residents and operating departments such as China Mobile, China Unicom, and telecommunications, as well as investigations by local radio management departments, have brought a certain negative impact on the normal work of the prison , Disrupting the harmony between the police and the people.

What purpose can a prison cell phone signal jammer achieve?

What are the technical advantages of the conference room signal jammer?